Beginning in 2005, Urban Logic saw dark trends in the banking sector: a lack of transparency, little 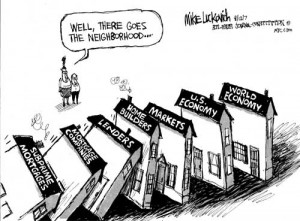 accountability for environmental or social impacts, and a high tolerance for breeding a professional culture on Wall Street and elsewhere of entitlement and rewarding the abject brilliance of pyramided schemes that generate no discernibly useful productive gain, only profits, to justify a bonus culture of Manhattanite excess. Gradually, a gloomy cynicism followed each debilitating moment of the subprime mortgage crisis, the 2008-10 severe recession, the widespread Ponzi schemes and subsequent discoveries. Urban Logic researched a more positive approach, wondering why the media focused so largely on disempowering solutions and solution builders.

Gradually, Urban Logic saw that Industrial Age banks seemed to be refusing to embrace the instant transparency and accountability of the Information Age. Worse, they used the technology to accelerate a more predatory user experience, where social web and browsing promotes gawking over-consumption, paid for on unaffordable credit, to buy things whose impacts globally (such as child labor) were unseen and unreported to the consumer. What if instead of camouflage, banks were highly-transparent? What if instead of “dumb money” that shows none of its impacts, banks were agents for showing such impacts, and creating “smarter money?” Rather than create a rating agency for sustainable resiliency, with its internal conflicts of interest, Urban Logic proposed to create a bank – GoodBank™(IO) – that would use sustainable resiliency to see its own and its customers’ impacts and commitments to impacts clearly, transparently.

Further research showed that, while the data to determine the health of a U.S. bank was freely available, it is illegal for any FDIC-insured bank to reveal publicly its official rating of safety and soundness as determined by its bank regulators. What if in addition to showing impacts, GoodBank were to unleash a tool for comparing its safety and soundness data with any other bank’s? That level of transparency would let a small bank compete more effectively with a big bank, based on safety, soundness and impacts. Sustainable resiliency, the Means Meter, a bank safety and soundness data analysis tool and other technologies represent an Information Age response to reforming banks and banking, and so by design, GoodBank would license these tools to other community banks and credit unions to let them more effectively compete and create user-customized experience for living their financial lives.