Urban Logic started as a finance lawyer’s quest to prevent and recover from extreme events.

How It All Started 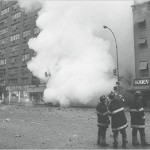 The catalyst for creating Urban Logic was the August 1989 Con Edison steam pipe explosion that sprayed 220 pounds of asbestos wrapping from a ruptured 135-year old steam pipe in New York City’s historic Gramercy Park, killing three people, making hundreds homeless during a nine-month cleanup, and causing upwards of $70 million in damage.  A Con Ed work crew re-pressurizing the pipe at 20th Street and Third Avenue was unaware of the City’s Water Department crew draining water at 18th Street and Irving Place, and that the water had pooled around the pipe at its  most fragile moments.

Bruce Cahan (Urban Logic’s founder and CEO) lived at 32 Gramercy Park.  As an evacuee, blown out of his apartment, Bruce wondered how the streets of New York could be made safe from explosion.  Bruce knew that Con Ed and Water Department work crews needed a shared map to see their operations’ proximity in real time, and take precautions accordingly.

On September 11th Bruce Cahan was in his Midtown NYC office speaking with Doug Yoder (Environmental Coordinator for Miami-Dade County) when the terrorists attacked the World Trade Center. In the following months, Bruce assisted at the NYC Mayor’s Command Center, providing logistical support to find, use and disseminate fast changing spatial data and maps needed to secure, recover and rebuild Lower Manhattan.

Today, Urban Logic is a portfolio of research and design projects aimed at enhancing urban sustainability and resiliency, primarily using the transitions in banking and finance, in order to move from analog camouflage money, to high-transparency, impacts-aware money.

TEDxNewWallStreet – Re-imagining Banking built in and for the Information Age

2008 – 2012 had seen a stubborn recession, shattering personal wealth and global confidence in the largest banks.  The Occupy Wall Street Protests in New York and London pressed for reforms to the banking system, by legislative, regulatory and judicial means. By March 2012,  Silicon Valley had been pursuing its agenda of revolutionizing the banking […]

Mapping What Matters Underneath Cities

All too often, city residents ignore what happens underneath their feet, realizing after an unexpected explosion or other incident, the sheer amount of design, construction and maintenance talent supporting energy and infrastructure layers that are the foundation of our above-ground lifestyles, businesses and environments. The engineering and navigation of sub-surface operations, rights-of-way and easements is […]

Amidst the rancor in Europe and the United States over migration, its risks and how to contain or adapt to it, the world is witnessing the rise of new nationalist movements. Against this background, Urban Logic began researching the history of migration, and how migration stories are told, mythologized and forgotten. Along with other nonprofits […]