Through its advisory role with the Federal Geographic Data Committee (FGDC) leadership, by the afternoon of September 11, Urban Logic arranged to obtain the first aerial photographs of Ground Zero, which Bruce Cahan and Hunter Professor Ahern printed out at CARSI Lab, and then carried through Midtown traffic into the temporary Command Center, at the Police Academy, located at 20th Street and Third Avenue, diagonally across northeasterly from 32 Gramercy Park building, the site of the 1989 steam pipe explosion. 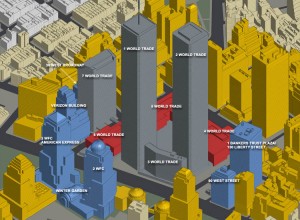 In the months after September 11th, Urban Logic provided liaison and logistical support for the Fire Department of New York (FDNY), the New York Police Department and dozens of other agencies, including arranging for CBS News to disseminate updated damage assessment and other maps to the global media, tracking the contracts, payments and work load of the EMDC, obtaining critical infrastructure data from Con Ed, title companies and other sources, and arranging for nautical maps in response to the crash of American Airlines Flight 587.

Urban Logic briefed Congressional staffers and other professionals on the geospatial response to the 9/11 World  Trade Center Attacks. With SUNY’s Center for Technology in Government, Urban Logic led NSF-funded research to collect and understand the oral history and lessons learned in the first-person accounts of the geospatial and other emergency responders. With the Council for Excellence in Government, Urban Logic co-produced a video shot at the Command Center and distributed to all members of Congress that featured geospatial responders like Alan Leidner, director of the Emergency Mapping and Data Center, and architect of NYCMAP. Urban Logic arranged for cutting-edge technologies to be deployed in New York City after 9/11, including SensorWeb interoperability then being piloted by EPA and OpenGIS Consortium so as to better detect biological, natural hazards or other threats.