An Example of Sustainable Resiliency® Thinking

As a strategy for urging the sharing of underground infrastructure geospatial data in the 1990s, Urban Logic began researching the street franchises permitting utilities to run high- and low-tension electrical, gas, telephone and steam distribution networks. With Tim Reason a Columbia University graduate student, the research revived the City’s memory of rights long-thought lost to demand data from its franchisees, Empire City Subway (a Verizon subsidiary) and Con Edison, that resulted in access to elements of the companies’ geographic information systems’ data, ”free”.

The underground franchise research led Urban Logic to advocate reviving proposals from the early 1900s for delivering small packages throughout the City by subway, a project called SubEx. As proposed to the Transit Authority, SubEx would reduce the freight carrying demands by courier vans and trucks on the City’s surface streets, and thereby reduce congestion, pollution and vehicular accidents, while simultaneously adding freight-based revenues to the subway system that could fund overdue Americans with Disabilities Act elevator and other capital improvements. SubEx was proposed as a franchise to be operated by a consortium of freight logistics companies, leveraging and providing synergies with their existing and future bar code and other package tracking technologies. 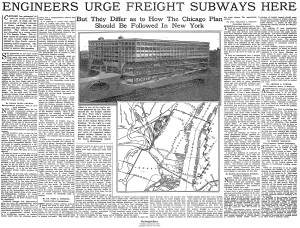 SubEx was a finalist in the Buckminster Fuller Institute Challenge. SubEx is a practical example of the application of Urban Logic’s sustainable resiliency underwriting principles to municipal finance, as it simultaneously would reduce energy demands within the City (gas-powered trucks) while strengthening mass transit system capital infrastructure, safety and revenues. As a City exposes to pothole lawsuits, under-grounding small package freight would reduce surface wear on City streets and thereby the incidents of “slip and fall” liability to the City and other drivers from courier van operations. NYSERDA had previously studied a similar proposal for pneumatic tube freight.

Amidst the rancor in Europe and the United States over migration, its risks and how to contain or adapt to it, the world is witnessing the rise of new nationalist movements. Against this background, Urban Logic began researching the history of migration, and how migration stories are told, mythologized and forgotten. Along with other nonprofits […]

October 26, 2010 at the Koret-Milken Institute in Jerusalem offered Urban Logic the opportunity to present research on using using interfaith ethics to tag money, and in that way bring greater understanding and tolerance to the various religious groups in and surrounding Israel. The Koret-Milken Fellows are impressive, and go on to occupy major leadership positions […]

It’s taken longer than we imagined, but finally our WordPress website is ready for primetime. Please let us know what you’d like us to add, fix and collaborate on! ….. The site is still very much “in beta test mode,” so please excuse the punch list items and let us know anything you’d like us […]