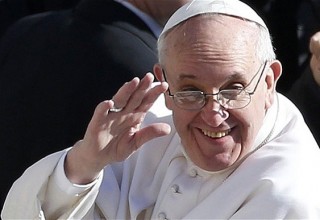 The Vatican has been a bell-weather of human rights concerns and research for centuries. His Holiness Pope Francis’ personal commitment to put actions in front of the Holy See’s words are having a profound effect in Vatican City and globally.

The Pontifical Council for Peace and Justice, led by His Eminence Cardinal Peter Kodwo Appiah Turkson from Ghana, is responsible for developing policy and nudging its implementation on issues that include business ethics, and the conduct of business leaders and their bankers.  The Vocation of a Business Leader captures recent policy research and thought.

Initially in October 2012, and then as part of the Pontifical Council’s Colloquium  on the theme Banking on the Common Good, Finance for the Common Good on May 13, 2013,Urban Logic has brought forward our design work on high-transparency, impacts aware banking and related research to inform the Vatican’s (and our own) interfaith dialogue on creating banks and training bankers to handle money that is authentic in achieving its intent and impact, ethically.  From little acorns, giant chestnut trees grow!

For more on the May event, Cardinal Turkson’s interview and the Pontifical Council’s press release are here, and Vatican Radio’s coverage here.

Practicing What is Preached...As importantly, informal conversations with the new head of the IOR (Vatican Bank) on that Monday May 13th, were prelude to the Bank agreeing om May 22nd for the first time to release its financial monitor’s reports – Transparency momentum in action is good to see!

By September (2013), the Pope was speaking out regularly, decrying the idolatry of seeking money as an end goal or end game, and urging the globalized economy to return to the core functions of providing meaningful employment, and the honorable reality of a job creating meaningful lives.