Istanbul sits smack on top of some of the Earth’s most active seismic faults.  A city of nearly 14 million, the risks of repeating past earthquakes exceeding 7 in magnitude, threatens rich and poor alike.  Current USGS projections, show the vulnerability maps, with devastating clarity.

The geology of how this region formed explains what is happening now:

Turkey geologically is part of the great Alpine belt that extends from the Atlantic Ocean to the Himalaya Mountains. This belt was formed during the Tertiary Period (about 65 million to 1.6 million B.C.), as the Arabian, African, and Indian continental plates began to collide with the Eurasian plate, and the sedimentary layers laid down by the prehistoric Tethyan Sea buckled, folded, and contorted. The intensive folding and uplifting of this mountain belt was accompanied by strong volcanic activity and intrusions of igneous rock material, followed by extensive faulting during the Quaternary Period, which began about 1.6. million B.C. This folding and faulting process is still at work, as the Turkish and Aegean plates, moving south and southwest, respectively, continue to collide. As a result, Turkey is one of the world’s more active earthquake and volcano regions. Helen Chapin Metz, Turkey: A Country Study (1995). 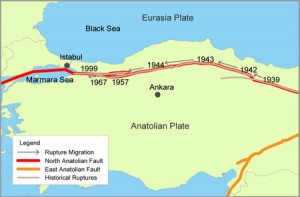 We know an earthquake of magnitude 7.2 or greater is likely for Istanbul in the next 30 years.  We know that the immigrant poor in Istanbul live  in squalor, in make-shift shacks connected as shanty-towns (“informal settlements” seems to be the polite term) built on the most seismically active areas of the City.  We know that Istanbul’s city government derives nearly 50% of its non-tax income (“government sponsored enterprises”) from a gas pipeline some of which runs near or would be threatened by the collapse of structures underneath the shanty-towns.  And we know that 40% of Turkey’s sovereign debt rating is attributable to Istanbul’s municipal credit rating, because 40% of Turkey’s economic activity occurs in the Istanbul Metropolitan Region.

Thus, it seems that the economic, humanitarian and foreign aid contexts for addressing the shanty-towns of Istanbul need not wait for the next earthquake.  Community land grants, housing revitalization and retrofits and a culture of job creation and entrepreneurship would be worthwhile strategies for improving the survivability and quality of life in Istanbul’s poorest neighborhoods, mitigating pandemic risks post-earthquake, and reducing the chance that slums gestate homeland security risks there or elsewhere.

« State-Owned Banks: why just after a crisis?
TEDxNewWallStreet – Re-imagining Banking built in and for the Information Age »